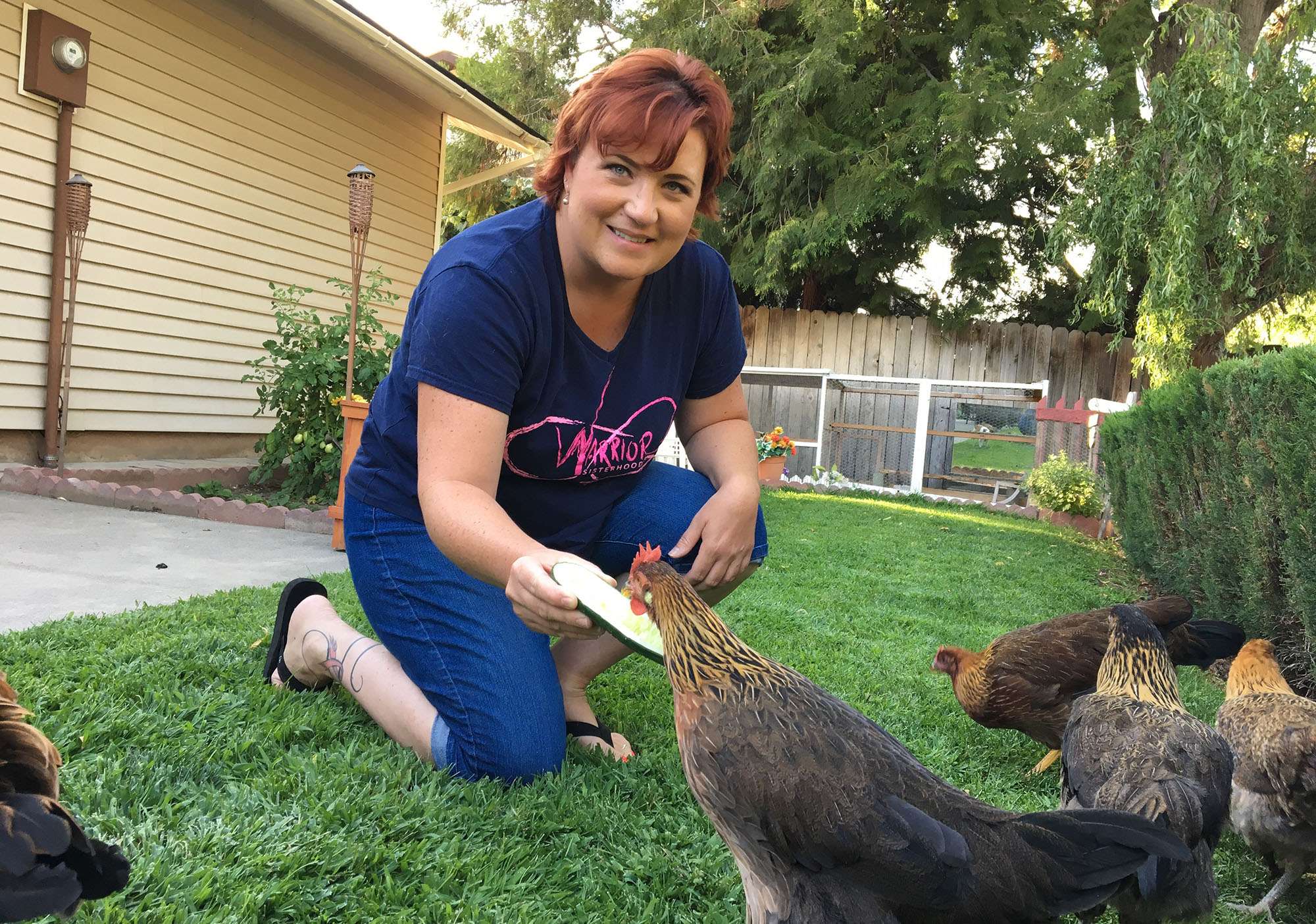 Raising her flock of feathered friends has been a good antidote after a year of fighting cancer and for mending a broken heart.

“Their wacky personalities. The way they waddle when they run. They’re just hilarious and they make me happy,” said Northrup, 39, of Richland, who was diagnosed in 2013 with breast cancer.

Northrup found what felt like an “egg-size” lump in her right breast just before her 37th birthday. A biopsy, MRI scan and lumpectomy followed to treat her stage 2B triple-negative cancer. She also underwent 16 rounds of chemo and 33 doses of radiation at the Tri-Cities Cancer Center.

Northrup is an active member of Warrior Sisterhood, a cancer center support group that helped her through some dark days. She said she frequently posted questions on the group’s private Facebook page during her treatment and found comfort sharing with others who went through the treatments before her.

Warrior Sisterhood, a program of the Tri-Cities Cancer Center Foundation, meets at 5:30 p.m. the second Wednesday of every month. Call 509-737-3432 for location. Or reach them online at https://tccancer.org/warrior-sisterhood, via email at tcwarriorsisterhood@gmail.com, on Facebook or on Twitter @WarriorSisters1.

While fighting cancer, Northrup worked at the Pasco Police Department as secretary to the police chief. She said her police colleagues were extremely supportive in the wake of her diagnosis, shaving their heads in solidarity when she started treatment and donating sick time to her so she could afford to stay home on her worst days.

They also organized a spaghetti fundraiser that raised $8,000, which allowed her to pay for out-of-pocket medical costs and take a family vacation to Mexico to celebrate the end of cancer treatment. During that fundraiser, her son and boyfriend’s daughter shaved their heads in solidarity. “It was very touching and emotional to say the least,” she said.

In January 2016, she reflected on her year of treatment and created a photo book chronicling her journey called, “Health is our greatest gift.” It features her thoughts and feelings about cancer, her treatment and numerous photos.

“I made it through the worst of everything and wanted to be able to reflect back on it someday. Surviving cancer wasn’t the end of a gruesome story, it was the beginning of a
beautiful one. I also wanted to be able to share it with my children when they’re grown and most of all share it with the other ladies in my support group. I wanted to empower them to do the same as a way to heal. I think it’s very healthy to write your story from beginning to end,” she said.

She thought the happy ending to her story was beating cancer but there was another devastating chapter ahead. Not long after she finished the photo book, her boyfriend of five years ended their relationship. It was devastating after all his support during her cancer treatment, she said. But her cancer journey had already helped to prove to herself just how strong she was. She moved into a new home with her sons, Tyler, 16, and Cody, 14, and got a new job.

In March, she began working as a division administrator at Pacific Northwest National Laboratory in Richland. She finds the job rewarding because she works for the Biological Sciences division. Among several sciences being researched, one hit very close to home for her — its work in finding a way to better understand cancer cells. “It’s so gratifying to work for a place that does such meaningful research and I really wanted to work there. I wanted to be a part of that team helping the world be a better place,” she said.

Her life of new beginnings also includes her beloved chickens.“I love taking care of them. They’re therapy for me and they help me with my gardening. My family and friends also enjoy the giggles when I share all the funny things that they do,” she said.

Northrup said she’s learned many lessons since her diagnosis. “The main one is, ‘You never know how strong you are until strong is all you have.’ It’s my favorite quote and it’s so true — it helped me get through all my darkest days,” she said. “It is so easy to forget how precious everything is. In the blink of an eye, it can all change, so do things that make you happy,” she said.