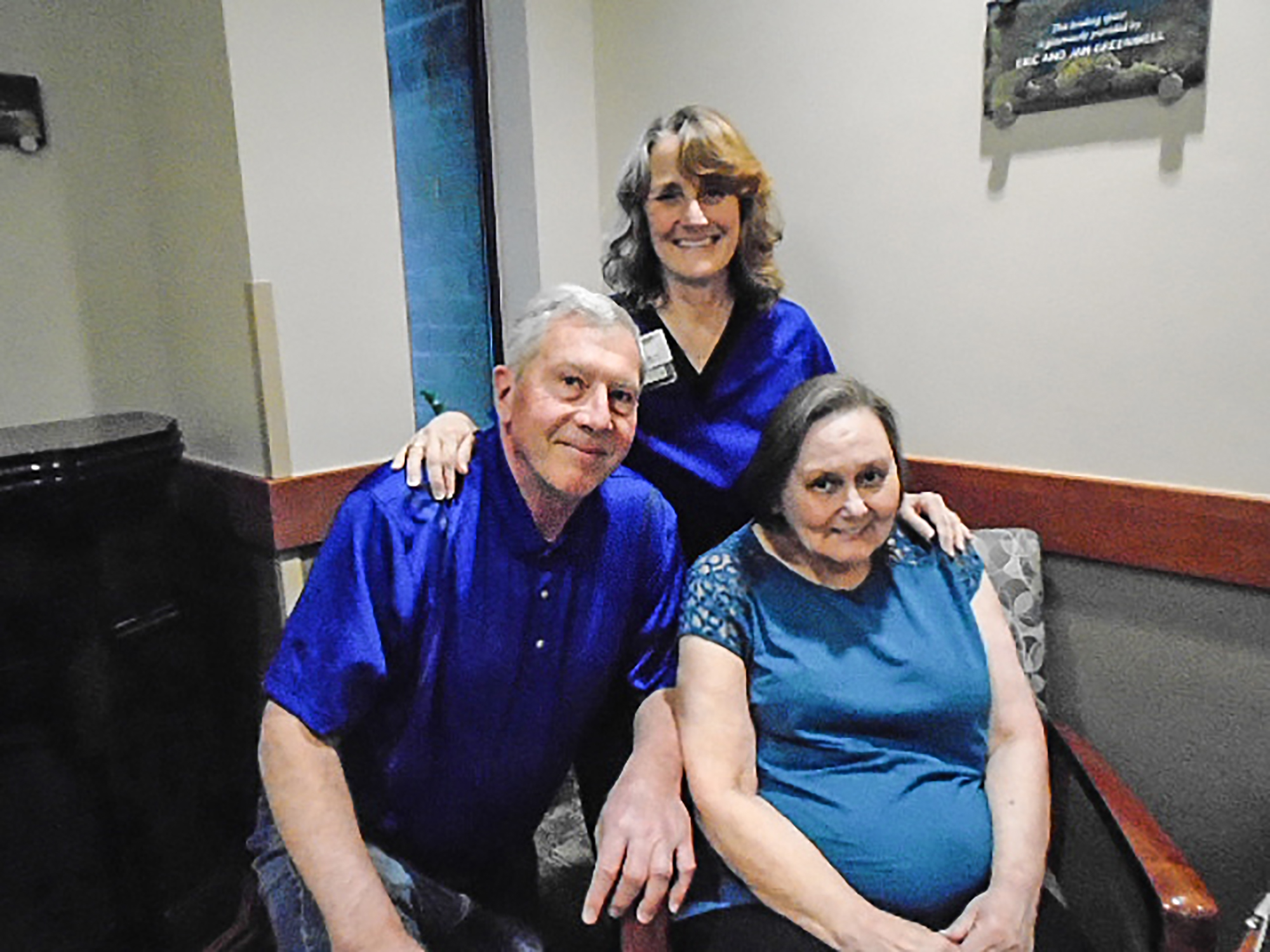 From a basement to a state-of-the-art campus
Marj’s first cancer diagnosis was in 1992. She’s frank to admit that this news simply “shut me down.” Worse, there were few places in the Tri-Cities at that time where she and husband Chuck could learn more about treatment options or surgeons who could perform the specialized procedure she needed. The procedure was eventually done at St. Vincent’s Medical Center in Portland with the follow-up radiation treatment initiated at Kennewick General Hospital (KGH), which was the early home of the Tri-Cities Cancer Center.

She and two others were the very first to be served by the Center at a time when construction of a new facility was just getting underway. This construction work has taken the Center from 4 small rooms in the basement of KGH to a beautifully landscaped campus and a 36,000 square foot building housing (among other facilities) 10 exam rooms, an on-site reference library and cutting edge radiation oncology technology. There have been other changes; Marj recalls that things were slower back then with 15 employees serving mostly local patients. In contrast, the Center now has over 50 employees assisting more than 700 patients a year
coming from all over southeast Washington. While she appreciates most of the changes, she wistfully recalled that protocols were more relaxed during her first visit when Chuck was allowed to sit alongside her during the radiation treatment. But asked to contrast the Center then and now, she said ‘today it’s simply beautiful.’

One thing that has not changed is the care and personal attention patients receive. A familiar face to current patients is Kristi Rhodes, TCCC Radiation Therapist. Kristi was in the basement with Marj for her first treatment and is still serving Cancer Center patients. “She has the same professional, warm and personable tone I remember from back then”, Marj says.

Loving support and laughter are key
Like many patients, Marj found it crucial to have a companion with her during medical exams. This support person takes notes, asks questions and is there to discuss issues after each visit. Marj’s companion was her husband, Chuck, who was with her for all her appointments.

They were married two years after she was first diagnosed with cancer. He’s stuck with her through subsequent cancer diagnoses, bouts with ischemic colitis, the discovery of ‘spots’ on her optic nerve, lumpectomies, a collapsed lung and a painful mass on her hip. And he continues to support Marj today for all her ongoing therapies.

A love of travel was a common bond when they met and they still try to venture out after the completion of each treatment. Their favorite trips included one to Whistler, Canada (“…where we had great fish!”) and another to Las Vegas (“…where I walked Chuck’s legs off.”). Not all trips were perfect. They both laugh when talking about a road trip along the U.S – Canadian border where they just packed up and took off with little planning. “The scenery was fantastic” Marj says,” but the hotel we picked …not.” Both were laughing as they told this story and wanted to encourage other patients to travel. But they had two important caveats. First, check with your physician before taking off. And second, “Don’t stay in the first hotel you come to …unless you want some really good stories for later.”

Getting through it all
Maintaining a feeling of normalcy was important to Marj during her many medical battles. Although she continued working for the City of Richland during her treatments, she was hesitant to share her health status with colleagues, friends or relatives. “I’m a very private person and felt uncomfortable opening up to everybody about how I was coping or how I felt.“ She did have an outlet, with Chuck always there to help her cope with challenges. But Marj suggests that ‘private people’, like her, consider speaking with counselors or other professionals. “Everyone has to do what they think is right for themselves, but for some reason, I found talking to strangers easier than talking with friends or relatives.”

Asked how she responded to her many close calls and amazing rebounds Marj said “I just wasn’t ready to die yet. I had things to learn and do.” She implemented this philosophy by practicing living one day at a time or, when things got really rough, “just 5 minutes at a time.” Staying active and knowledgeable about the treatment plans also helped her control her future, which she has always wanted to do “on my own terms but with flexibility to change my mind as more information becomes available.” She acknowledges still having fears about any upcoming visit to the doctor and concerns about future therapies. But 25 years after that first diagnosis, Marj says “you can get knocked down but you just have to pick yourself up and keep going.”