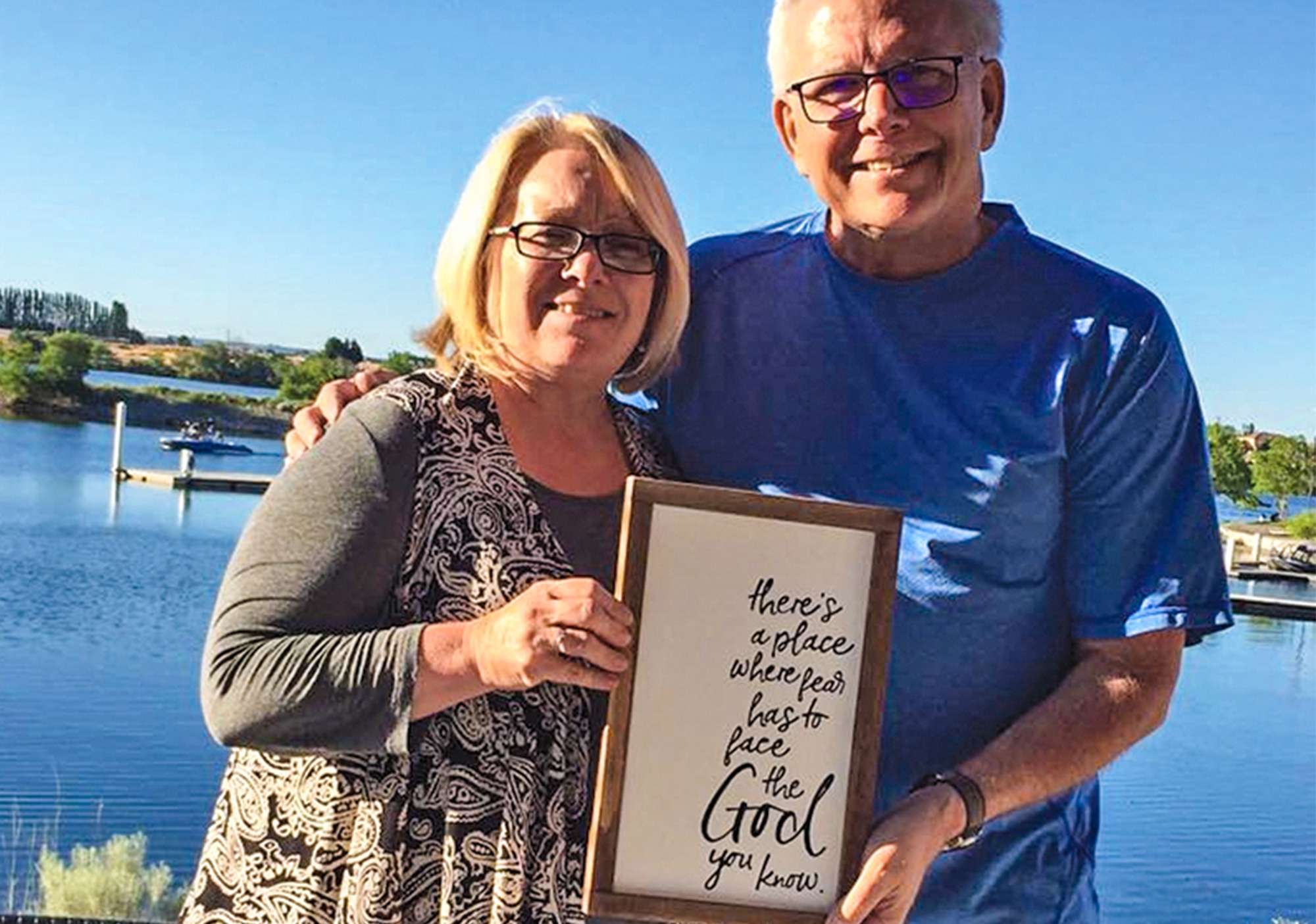 There’s never a good time for a cancer diagnosis. But it would be difficult to think how it could have been more complicated for Fred Higgins. He was in the process of moving his family to the Tri-Cities from Cannon Beach, selling his old home, building a new home, starting a new business (“Kitchen Designs by Fred”) and scrambling to install cabinets for the latest luxury hotel in our community, ‘The Lodge at Columbia Point’, where his wife Wendy was to start as the new manager.

Life was already challenging for Fred, Wendy and their children Katie, Chad and Charity. So when a biopsy on a lump in his throat came back positive, the challenges went from ‘big’ to humongous. Not only did Fred have to adjust to a rigorous treatment of radiation and chemotherapy (being done at the same time), but just when he needed more energy, there was less to be had.

“I was a non-smoker and in good shape at the start of the treatment. Dr. Choe [Tri-City Cancer Center radiation oncologist] told me this would make everything go better.“ So at the start of his treatment, Fred thought that he could swing by the Cancer Center, have the procedures, then walk over to his new shop and get back to work. But his body had different ideas. “The energy wasn’t there. I tried to ignore my body but eventually I had to listen.” Family came to Fred’s rescue with Chad and son-in-law Bob Smith helping to meet the demands of Fred’s new business.

Eventually, work for ‘The Lodge’ was completed, the old house in Oregon was sold, the new house finished, and the family relocated to the Tri-Cities. Fred finished his treatment in May of last year. With these adventures behind him, Fred and Wendy could now reflect back and share some of the surprises coming from their cancer experience.

The Importance of Dental Hygiene
“I always knew dental hygiene was important, but was surprised to learn how incredibly important it is when you have cancer” Fred says. One of the first things he did following his diagnosis was visit his dentist for a special cleaning and to have other work that had been postponed. “Chemo can have a big effect on saliva production, and this can have a big effect on oral health”. In fact, dentists can be the first medical providers to detect throat cancers, which is one reason Dr. Choe offers seminars to help dentists identify problems during standard oral exams.

Reaching Out to Others
Fred thought it would be beneficial to share his therapy experiences while going through them and used Facebook to get the word out. “I wanted to help others experience what I was about to go through, but was surprised that it made me feel much better, too.”

“Everybody knows that ‘cancer sucks’ “Fred says.“ But most people have no idea what you’re actually going through.” But sharing his experiences with others didn’t prepare Fred for the outpouring of love and concern that came back to him. “I had no idea I meant so much to so many people.” Smiling, he said that he thought such an outpouring of kind words would come only at his funeral. “But it was a nice surprise to hear them now!”

His openness in sharing experiences extended to everybody, including grandkids. He shared a video in which he demonstrates use of his gastric feeding tube to grandchildren Micah (age 4 years) and Halo (2 1/2 years). Both peppered him with questions and watched in wide eyed amazement.

After Treatment, Now What?
Another surprise came in the months following treatment. “I learned it’s not over with the end of chemo or radiation. There was still a lot of recovery work to do.”

For a few months after therapy, Fred simply didn’t feel like his former self. He wanted to regain his energy, weight and muscle tone. So staff at the Cancer Center directed him to ‘WellFit™’, a joint venture between the Cancer Center and the Tri-City Court Club. Fred’s opinion of this program? “In one word…Wow!”

The WellFit™ instructors showed him exercises to regain strength and muscle mass. He became a regular participant in their exercise classes where he learned about the ‘Sonix’ machine, a device designed to enhance blood flow in the vicinity of neuropathic areas. More information on WellFit™ can be found on the Cancer Center website and in the December 2016 issue of the Cancer Center’s newsletter*.

The Future Looks Good
Fred is now back at work, enjoying grandkids and family and will soon be a regular face at the Cancer Center as a new member of the TCCC volunteer team. “I enjoyed sharing experiences at the radiation clinic with other patients as it seemed to help both of us. Now I’ll do it on a regular basis as a volunteer.”

And he had some frank but simple advice for others facing a situation like his. “Throat cancer sucks. But it’s a lot like other experiences in life. This too shall pass! There will always be surprises. But if you learn something from them, you’ll come out a better and stronger person.”

Note: Fred’s video can be see at: https://youtu.be/yx1W2kMDd1E
*The December 2016 newsletter can be viewed at tccancer.org/newsletter