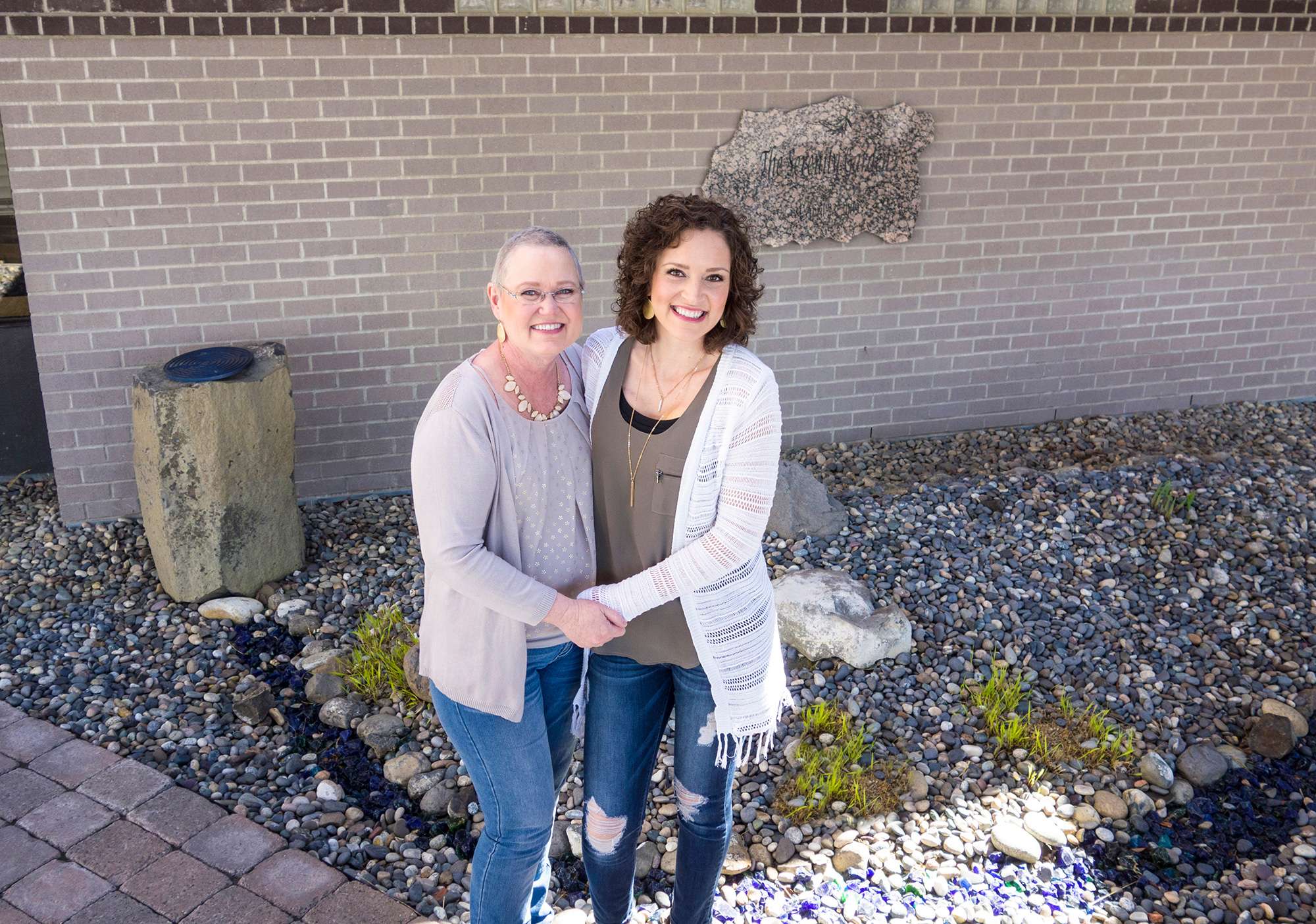 BRCA 1, BRCA 2: what they are, why they matter.
It was basically a gut feeling that led Megan Sisemore to have genetic testing done to evaluate the probability of developing breast or ovarian cancer later in life.

“I knew my maternal grandmother and paternal aunt had breast and ovarian cancer. While these weren’t first degree relatives, they were close enough so that my physician, Dr. Daniel Bahnmiller, thought it reasonable to have the testing as part of an annual checkup.”

Testing for mutations of the genes ‘BRCA 1’ and ‘BRCA 2’ gives only an estimate of the risk for breast and ovarian cancer. But Megan felt that such an estimate would be useful. “I knew that with any cancer, the sooner you know, the sooner you can take action and the better the prognosis.”

The test itself was a simple blood draw sent to the University of Washington. The results came back positive for the BRCA 1 mutation, implying that, compared to the general population, she had an 85% chance of developing breast cancer and/or ovarian cancer by the age of 50. Megan was 30 years old when the test was done. So the question became, what to do?

As a result of the test, Kadlec Clinic breast surgeon Dr. John Droesch ordered a baseline MRI for Megan. This showed spots that later tested as malignant. “If nothing else, the genetic test helped me flag the cancer before it could develop any further.” While Megan acknowledged the cancer diagnosis as one of the worst days of her life, she also notes that not finding the cancer would have been much more serious.

Her mother, Elizabeth, also elected to have genetic testing. She was already somewhat familiar with BRCA 1 and BRCA 2 thanks to movie star Angelina Jolie’s campaign to educate women on treatment options and testing. When Elizabeth’s test results came back, they too were positive for the BRCA 1 mutation. When her physician ordered biopsies and a detailed PET scan, both malignant ovarian and breast cancer cells were found. As was the case with Megan, Elizabeth’s cancer was also caught at an early stage, optimizing the odds of a good prognosis.

The Breast Center of Excellence
Dr. Droesch shared with Megan that her case had been the subject of discussion for the Tri-Cities Cancer Center’s (TCCC) Breast Oncology Program (which is pursuing the certification process to become a nationally accredited Breast Center of Excellence). Her medical record was reviewed by a team of breast specialists that included surgeons, medical oncologists, radiation oncologists, radiologists, pathologists, genetic counselors, nurse navigators, clinical research coordinators and chaplains. Medical personnel from the TCCC, Kadlec, Lourdes Health and Trios Health all participated in the discussion about what Megan’s best options
would be.

Her team of physicians from the TCCC Breast Oncology Program included Dr. Droesch, Kadlec Clinic Hematology and Oncology (KCHO) medical oncologist Dr. Eric Gamboa and TCCC radiation oncologist Dr. Sue Mandell. It was in consultation with this team that Megan made her decision of how to proceed. Not wanting to give the newly discovered breast cancer or potential ovarian cancer even a chance, Megan was advised and decided to have a double mastectomy, followed by chemo, radiation therapy, a full hysterectomy/oophorectomy, and finally reconstructive surgery.

While always special, the holidays that year were particularly sweet: “Treatment ended the day before Thanksgiving – I had so much to be thankful for that holiday!”

The TCCC Experience
Megan shared the story of how she initially felt scared and alone when beginning her treatment. Then one of the TCCC nurses casually stopped her in the hallway to say “You’re not alone. We’re here to help you.” This unidentified nurse said the right words at the right time. From then on, each treatment became easier and life began to improve for her.

“The Cancer Center staff changed my treatment days from being dark, somber experiences, to days where I looked forward to being with new friends, laughing and smiling.” Her mother Elizabeth saw the change in Megan and later experienced the positive atmosphere herself when she went to the Cancer Center for her treatment.

Speaking for both of them, Elizabeth said “One thinks a cancer treatment center will be dark and morbid. But it’s not. The TCCC works hard to have a warm, supporting atmosphere with strong support from everybody, even the other patients. We saw no need to go outside the Tri-Cities for our medical care.”

A Transition from Patient to Staff
As a patient, Megan was comfortable with the care she and Elizabeth received at the TCCC and the KCHO. But as a registered nurse, she was impressed with the medical and technical capability of the staff. So when the nurses at KCHO, which is located on the TCCC campus, asked if she’d like to join them, her response was “yes, I would.”

It was a perfect match. According to Elizabeth, “Megan has always had a passion to help people. Working for KCHO on the Cancer Center campus gives her the chance to support others who are going through what she experienced.” The change in jobs was not instantaneous. Megan had to undergo additional training in nursing oncology before starting at KCHO and notes that “more is coming!” But she’s already found a niche there, talking and working with patients who feel nobody can understand what they’re going through. “I can and I’m glad to share experiences and advice with my patients at any time.”

And Family Support (spouses take note!)
One of Megan’s first patients was her mother, Elizabeth. Having gone through chemo and radiation, Megan could share many practical survival skills for treatment. “Who knew that rapidly breathing out helps get rid of the nasty taste produced by a saline port flush?” says Elizabeth. “Or that Benadryl with some types of chemo can make you talk like a drunken sailor?” Receiving support from her daughter was special for Elizabeth. “The way I saw it, I gave her life and now she was returning to give me life.”

Not all support was purely medical. Megan’s daughters, Adilyn (age 14 months at the time of Megan’s treatment) and Aubrey (5 years) were only told that mom had ‘bad bugs’ that required ‘special medicine.’ Details were omitted. Another strategy for helping the girls centered on smiling. “It was sometimes very hard to smile around them. But that’s what I did. And it helped me feel good, too.” Megan found support from a quotation posted on the TCCC’s Warrior Sisterhood calendar, “Cancer can take
my hair, take my breast, take my ovaries. But it can never take the smile off my face.”

Megan and Elizabeth both credit their spouses for helping to keep life ‘normal’ during their treatment. Elizabeth’s husband, Rod, provided a shoulder to cry on when needed, and brought humor to sometimes dark moments. Megan’s husband, John, “…took on the kids, made sure they were having fun and set up activities to interact in front of me. He also provided many needed hugs and kisses when I was bald, sore and felt totally un-womanly.”

In summary
“Nobody wants to go through cancer” says Elizabeth. “But if you have to deal with it, deal with it with the Tri-Cities Cancer Center. The doctors, nurses, technicians and administrators are there to guide you and teach you. Everybody is just amazing. It’s almost bittersweet when the treatment is over; you’ve become such good friends with all the staff and the other patients. “